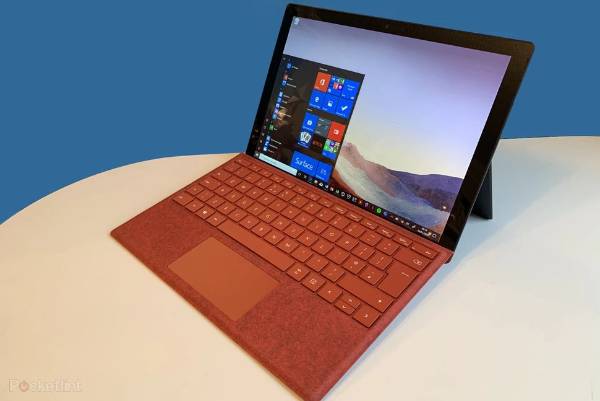 In a Report by Dan Grabham The Pro 7 didn't really make a splash upon its reveal - largely thanks to more exciting new products - because even though it has new hardware under the hood, it's only a soft redesign of the previous model. As such it doesn't feel like a revelatory device according to pocket-lint.com

The Surface Pro X, on the other hand, points towards the future of Surface - but it doesn't (yet) have the performance to match the hardware here.

All that in mind, how does the Surface Pro 7 fare? We've been using one for some weeks to bring you the lowdown.

Again, the size is dictated by the same 12.3-inch PixelSense display, but the bezels remain disappointingly large and this will need to change - probably later in 2020 - to avoid looking dated. After all, this is a premium device.

That the design has continuity isn't necessarily a bad thing - the Surface kickstand is now pretty iconic, not least because it works well and the tablet is adept at flexing to pretty much all situations instead of typing on your lap or on a thin tray table (need to do that? - get a laptop).

The Surface Pro 7 tablet itself comes in grey or black as usual. The black is probably our choice for the finish; it gets fingerprinty, but the lighter grey option marks more easily. That's not to say it isn't a durable device, however, because the casing tends to be pretty robust device and the kickstand is extremely solid.

The Surface Pro is certainly one of the most portable fully-fledged PCs you can get, at just shy of 800g - without the Alacantara fabric-clad Type Cover. You will, of course, want to buy a Type Cover to have an actual keyboard, as one isn't included in the box. There are new colour variants, too, the line-up including a darker grey, poppy red (which is what you can see on our fine review model), and dark cobalt.

The Type Cover acts as a really good keyboard, with decent travel on the keys, and not too much flex, so it's worth the investment. And it's not unusual for makers to now segregate parts - that's exactly what Apple does with the iPad Pro.

You can get away without the keyboard, since the Surface Pro 7 is ultimately a tablet and there's only one on screen in Windows 10's Tablet Mode. The choice is yours. Besides, the Type Covers magnetically clip on and come off with ease, depending on what you want to do.

The Surface Pen stylus - also sold separately - is less of an essential, but many will still feel compelled to buy one. And you can get them in various colours to match the new Type Covers, too, as well as grey and black.

Consumers searching for Burberry products on Google will be able to access the AR...