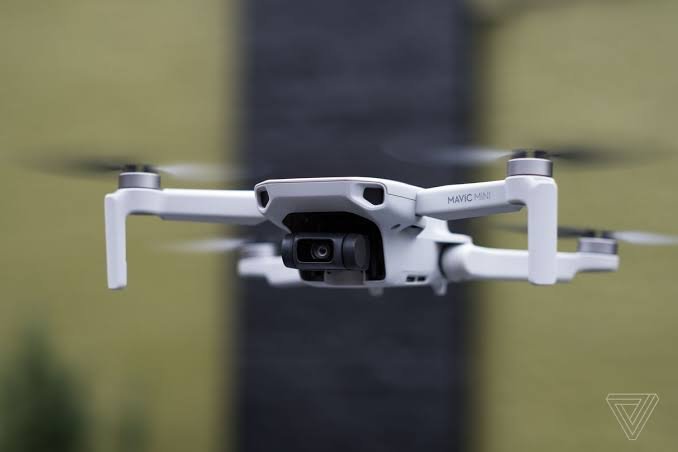 The DJI Mavic Mini is, as the name suggests, a mini drone. Indeed, it's what many call a 'toy drone' (DJI prefers 'Fly Cam'), hitting the size and weight points to circumvent the changing legal restrictions in a lot of places. People want drones and this is one way the Chinese company can continue to sell to its fans.

The price is very accessible too. it's easily the most affordable DJI drone to date. It's this entry pricepoint and the feature set - which includes a stabilised camera and much more - that promise great value and great fun.

The Mavic Mini isn't like the company's last small drone, the Spark, as its name attests. No, the Mini is like a shrunken version of the full-size drone with which it shares its name, including a foldable design to make it even more portable.

All over the body you'll see the Mavic-esque sculpting and angles, with the front that looks almost like a shark's nose, and a camera that hangs beneath it, mounted on a three-axis gimbal.

This point is pretty epic: it's the first time DJI has put a three axis mechanical gimbal on a drone this small. So not only does it fold up, it has much more stable footage than the Spark was capable of producing.

Because it's a Mavic, the camera sits at the front of the drone, rather than hanging underneath it like on the Phantom models, and it's covered by a transparent plastic housing that clips into place when you're not using the drone.

All the important ports are on the back of the drone. Here's where you'll find the battery door, which opens upwards to reveal a long and rounded cavity that's designed to hold the newly designed batteries. Unlike other Mavic models, the battery doesn't form any of the external shell of the drone - it's kept inside it.

Beneath, there's a microSD card slot and a micro USB port. It's a little disappointing that this port isn't USB-C, as it's slower to charge given the current port.

Turn the Mini upside down and you'll find the power button and the traditional four LED lights, some cooling vents and a couple of downward-facing sensors. And these are the only sensors on this tiny drone: there are no front, back or side sensors for avoiding obstacles - undoubtedly to both reduce cost and to keep the weight down.